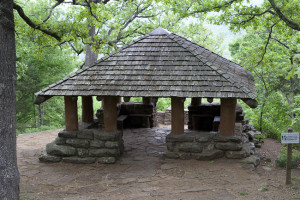 “Devil’s Den State Park in the Boston Mountains of northwest Arkansas is one of the best-preserved Civilian Conservation Corps (CCC) park developments in the United States and contains the largest sandstone crevice cave area in the country. The park is popular for a variety of recreational opportunities and was designated a Natural Area by the Arkansas Natural Heritage Commission.

“The Arkansas Archeological Survey in 1979 recorded eleven archaeological sites at the park. Six sites are prehistoric and indicate the presence of Native Americans as far back as 8,000 years. Archaeological evidence of European-American settlement indicates that whites probably settled in the area before 1836, the year Arkansas became the twenty-fifth state. Settlement of upper Lee Creek Valley steadily increased during the 1840s and 1850s, with settlement of the area reaching its height from 1880 to 1920.

“As with other early state parks in Arkansas, the land for Devil’s Den State Park was acquired by the federal government after it was forfeited by families who could no longer keep up with taxes on their property during the Great Depression.

“Devil’s Den State Park was created on October 13, 1933, which coincided with the creation of the CCC by President Franklin D. Roosevelt. The first CCC company occupied Devil’s Den State Park on October 20, 1933. The main goal of this unit, made up of men from North Dakota, was to construct a good gravel road from West Fork (Washington County) to Devil’s Den. The road later became Arkansas 170. The CCC also built the first hiking trails in the park, as well as a stone dam on Lee Creek, cabins made of native stone and logs, campgrounds, offices, and a restaurant. Construction of trails, roads, and other minor buildings continued until the CCC disbanded in 1942.

Cabins began to deteriorate in the 1950s, and the state had little funding available for maintenance and facility development. During this time, one cabin burned, and other buildings were removed or lost. Much-needed renovation of CCC cabins and other facilities—campgrounds, swimming pool, maintenance compound, an employee residence, and water/wastewater treatment systems—occurred in the 1960s and 1970s. Nevertheless, several CCC-era structures were lost. The rustic log-and-stone bridge that crossed Lee Creek washed away in a flood and was replaced by a modern highway bridge still in use today. Another cabin was destroyed by fire around 1967, and the logs of the rustic overlook shelter rotted and were replaced with new lumber.

Lee Creek dam, completed on April 1, 1937, was damaged by floodwaters on April 24, 2004, due to heavy rain in Lee Creek valley which raised Lee Creek to a record level.

While some CCC-era structures have been lost, the park is one of the most complete and best-preserved CCC-era parks in the country. In 1994, the entire park was designated a National Historic District and placed on the National Register of Historic Places. In 1999, the significance of the CCC-era landscape design at the park was recognized by the American Society of Landscape Architects when it presented the park a Centennial Medallion Award.

The parkland is in the Boston Mountain subdivision, the southernmost, highest, and most severely eroded of the three plateaus that form the Ozark Mountains. Lee Creek, which runs through the park, has cut through layers of sandstone, shale, and limestone to expose them to view….

“The park contains a Civilian Conservation Corps Memorial Statue, dedicated near the dam site on June 30, 2002. The memorial statue is a six-foot bronze of a CCC worker set on a four-foot pedestal with a commemorative plaque attached.” 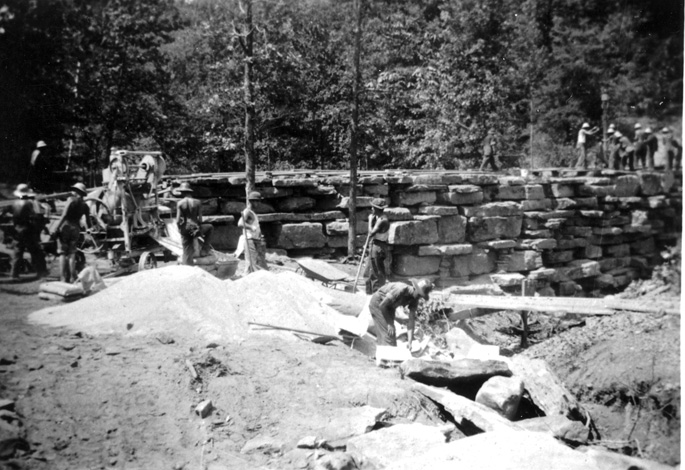