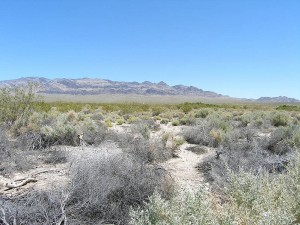 “Established in 1936, the Desert National Wildlife Range was created to protect the shrinking herds of desert bighorn sheep whose population had dipped to a record low of three hundred by the 1930s. The wildlife range is the largest in the county, subsuming 1.5 million acres of rugged mountain ranges and desert basins in the southern part of the state. The Fish and Wildlife Service purchased the old Corn Creek Spring Ranch in 1939 for this purpose. Compared to the permanent CCC programs at Ruby Lake and Sheldon NWRs, this FWS program was short-lived. CCC camp rosters show that Camp Corn Creek was officially occupied for a month and a half during the summer of 1941.”

“Despite its seemingly short duration, sufficient progress was made the previous year by a Camp Las Vegas ((DG/G-122) spike camp. According to a Las Vegas newspaper, the Grazing Service and Biological Survey collaborated on several range projects in the Sheep Range…The spike camp built twenty-four miles of truck trails from the wildlife range headquarters at Corn Creek Ranch to the Hidden Forest, and another twenty-seven miles of truck trail from the headquarters to Mormon Wells. To impound rainfall from summer monsoons, two million-gallon capacity earthen reservoirs were constructed in White Sage Flats and Three Lakes Valley (currently within the boundaries of Nellis Air Force Test and Training Range). The Grazing Service developed several mountain springs with underground storage tanks and troughs. Access to the range was important, and the CCC-built roads made the countryside more accessible to stockmen, wildlife staff, and outdoor enthusiasts.”