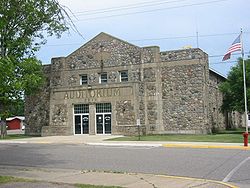 “The Deerwood Auditorium is a community center in Deerwood, Minnesota, United States, built as a Works Progress Administration project. The auditorium, built in 1935, is listed on the National Register of Historic Places, a rare surviving example of federal relief architecture in Minnesota.

…The town first received funding for the auditorium in 1935 through the State Emergency Relief Administration, but the SERA’s function was later subsumed by the Works Progress Administration.