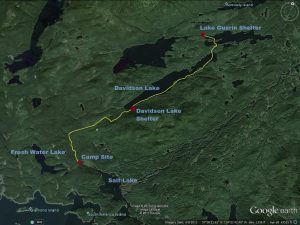 The Davidson Lake Shelter/Lookout was built for public recreation by the CCC in 1935 and is part of the Admiralty Island Canoe Route. Located in the central region of Admiralty Island, on the western end of Davidson Lake. The cabin has been maintained and restored with materials similar to the original. As of 1992 it was in good condition and well maintained.

A 1992 National Register of Historic Places survey describes the characteristics and condition of the cabin:

“The Davidson Lake Shelter Cabin is a three-sided Adirondack style temporary shelter on the Admiralty Island Canoe Route that was constructed by Civilian Conservation Corps workers during the 1930s. It has a peeled log superstructure and shake walls and roof.

The structure is well-maintained, and its current appearance is similar to its original appearance. The sill logs have been replaced. Chainsaw cuts are visible on the replacements. Plywood shims were used to level the posts. The wall shakes are twenty inches long and abut vertically. None of the roof or wall shakes is original. Unlike many of the other shelter cabins on the canoe route, the front of the shelter does not have shakes protecting the ends of the horizontal poles used as nailers for the wall shakes. A painted box has been installed recently by the U.S. Forest Service to hold a visitors 1 register.

The natural context has not been changed since the shelter cabin was built. It overlooks Davidson Lake.”

Project originally submitted by Brent McKee on May 29, 2017.