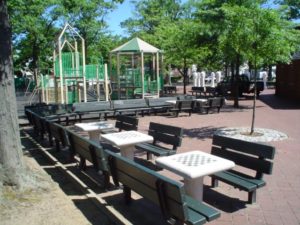 “O’Connell Playground opened on July 15, 1934, and is one of nine playgrounds that were built by Parks through the War Memorial Fund. The Fund was established in 1921 with $250,000 collected by the Police Department. In 1934, the fund remained untouched and had grown in value to $350,000. Seeking additional open spaces for children, Parks Commissioner Robert Moses obtained a legal ruling that permitted the fund to be spent on several playground developments. The properties were intended to honor the memories of individual soldiers who had given their lives in combat.

The Fund was transferred to Parks on March 19, 1934. With additional funding from the Federal Temporary Emergency Relief Administration, nine playgrounds were constructed within four months. Each site was equipped with a play area, wading pool, brick field house and comfort station, flagpole, and commemorative tablet. Mayor Fiorello H. LaGuardia and Commissioner Moses dedicated all nine of the memorial playgrounds simultaneously in a ceremony held at William E. Sheridan Playground in Brooklyn. The program was broadcast to all of the other playgrounds by means of an elaborate public address system.

Parks acquired the land for O’Connell Playground on July 12, 1934—just three days before the official opening. A 1935 article in the Daily Press noted that WPA funding and contributions from the O’Connell Playground Mothers’ Club provided trained supervisors at the playground.”