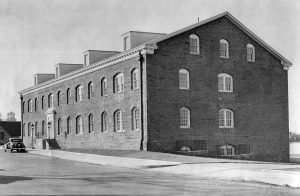 Originally constructed in 1809-1910 and privately owned, the U.S. government purchased what is now the

GSA: “The George Hall Corporation, a shipping company, owned the Parish Store from 1880 to 1936. Likely due to needs for additional space, in 1928, the U.S. Customs Service moved back in to leased space in the Parish Store. In 1936, the Hall Corporation sold the building to the U.S. government for $65,000. The building was renamed the U.S. Custom House. … Listed in the National Register in 1974, the building was renamed in honor of the late Robert C. McEwen, a U.S. Congressman, in 1982.

After purchasing the building in 1936, the federal government modified the exterior and interior to reflect the popular Colonial Revival style of the period. Dormers and cornices supported by modillions (scroll-shaped brackets) were added. Most of the large loading doors were partially filled in with limestone and converted to paired windows. In 1958, a simple, one-story portico, similar to one constructed in 1937 and later removed, was added to the north Water Street side of the building. A small limestone addition was built at the southwest corner. These exterior modifications were done with restraint and sensitivity, leaving the character of the building largely intact, while accommodating its new use.

The building interior dates entirely from 1937, when a complete remodeling was undertaken at a cost of $125,000 to provide offices for the U.S. Customs Service. Vestiges of the 1809-1810 structure remain in transverse load-bearing masonry walls, the closets under the eaves of the third floor, and the original beams.”