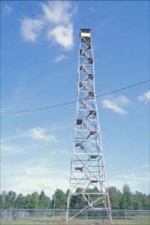 “Crossroads Fire Tower is being nominated to the National Register of Historic Places with local significance under Criterion A for its association with the emphasis upon conservation of the abundance of natural resources in this area. This was also the original mandate of the Civilian Conservation Corps.  It is also being nominated under Criterion C as a good example of a fire tower built by the Civilian Conservation Corps.  This nomination is also being submitted under the multiple property context of “Facilities Constructed by the CCC in Arkansas, 1933-1942.”

…The State Forestry Commission chose a location known as Crossroads to erect a fire tower.  The Aeromotor Company built the fire tower, which was brought from Enid, Oklahoma.  After arriving in Hamburg the fire tower was erected by the Civilian Conservation Corps (CCC).  The CCC was formed from Franklin D. Roosevelt’s program designed to help the national economy and preserve natural resources.  There were more than 500,000 men in this program nationally at its peak.  About one half of those men were responsible for forest service projects.  In total, they erected 3,100 fire towers.  During this time in Ashley County, there was a 200-man camp initially established east of Crossett but later moved to Hamburg.  This camp was responsible for erecting the Crossroads Fire Tower.

Forest fires were common during the spring fire season, which extended from mid-February until the grass and other vegetation turned green and the fall fire season lasting from about October 1st until the winter rains started in December.

Crossroads Fire Tower was opened in 1935.  The concrete corner bases of the tower have the year 1926 etched on them.  The concrete step base has the date September 23, 1926.  We have been unable to connect the year etched on these bases with the year that we have that the tower opened in 1935.  In the early days of operation, a house was built on the same property as the fire tower to house the fire tower operator.  This house was located almost exactly where Hamburg Rural Water tower is now located. The Crossroads Fire Tower served as a lookout tower from 1935 until the time it was closed in 1985. Many towers including Crossroads were phased out in favor of aerial fire detection.  Today there are only twenty remaining fire towers of the 105 that the state once had. “