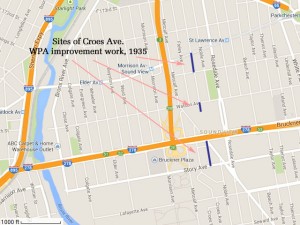 The federal Work Projects Administration put many men to work starting in 1935 with a Bronx street repair and maintenance project along roads throughout the borough. The streets, many of which in New York City were still unpaved, were surfaced with penetrated macadam. Roads improved included three modest stretches of Croes Avenue in the Soundview section of the Bronx: (a) between Story and ‘Sound View’ Avenues; (b) from Watson Avenue south (a dead-end stretch of Croes Ave.); and (c) between Gleason and Westchester Avenues.