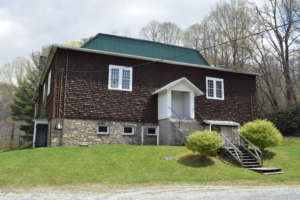 Originally a gym for Cranberry High School. Now owned by an alumni group and used for various functions.

The WPA began building the gymnasium on January 27, 1937. The construction employed sixty workers and cost $12,000. On the cusp of its construction, a Johnson City, Tennessee newspaper described the planned 80’ by 120’ building as having a coach’s office, dressing rooms for girls and boys. Native stone formed the foundation and basement and stained shingles sheathed the exterior. The gymnasium was one of 277 recreational buildings constructed in North Carolina by the WPA by the spring of 1942. One year later, on April 30, 1943, the federal government shut down the WPA in North Carolina.