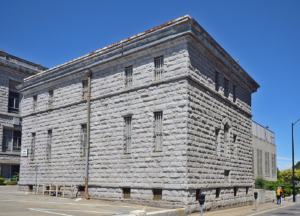 In 1938, the Works Progress Administration (WPA) made improvements to the former Contra Costa County jail, which stands just behind the old courthouse (the present Finance Building) at 625 Court Street.

According to a WPA Project Card from the National Archives, the work involved painting the interior and exterior of the jail and the project was approved for $14,888; but because the card appears to combine painting work at the jail with painting the Hall of Records (in the present Taylor courthouse), it is unclear how much was allocated to the jail.

The city is considering tearing the building down, but its inclusion into the National Register of Historic Places is making the demolition process difficult (Weilenman 2015). The building stood empty behind fencing in early 2022.

There is a new county jail next to the new courthouse building two blocks south. 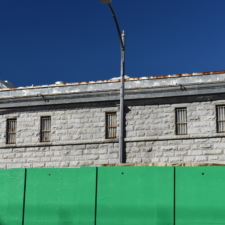