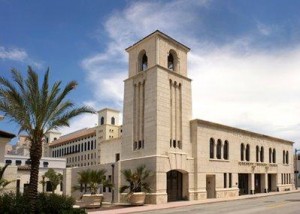 “The Coral Gables Public Safety Building, more commonly referred to as the Old Police and Fire Station, was built in 1939 on the corner of Argon Avenue and Salzedo Street. Phineas Paist, the city’s principal architect, included a courtroom and a jail in his design of the building. The structure is constructed of oolitic limestone, a type of rock native to this area. The Salzedo Street side of the building is decorated with impressive carvings of firefighters, as well as images of the people and pets that they are sworn to save from fires and protect from harm. The building now houses the city’s Historical Resources Department and the Coral Gables Museum.” (http://coralgables.fiu.edu)

Note: This account and museum staff believe the building is WPA. The display photo shown here says PWA. PWA may be more likely given that the WPA and the PWA are often confused, and that the agency was responsible for most large public buildings.

Update July 28, 2015: According to the National Archives, original construction is indeed attributed to the WPA.