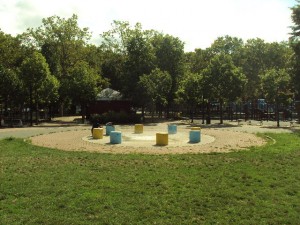 Cooper Park in Williamsburg, Brooklyn was improved by the WPA during the 1930s.

According to the New York City Parks website, industrialist and philanthropist Peter Cooper’s “descendants sold the site of the old glue factory to the City of Brooklyn for $55,000. Within a year the site, known as Cooper Park, was outfitted with a playground and landscaping. By 1905 the limestone and brick shelter pavilion had been erected. In the late 1930s construction carried out by the Works Progress Administration transformed Cooper Park into a modern recreational facility. New features included a roller-skating track, sitting area, horseshoe and shuffleboard courts, wading pool, play areas for children and tots, and two softball diamonds with bleachers.