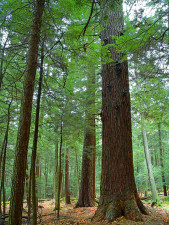 “On March 31, 1933, President Franklin D. Roosevelt created the Civilian Conservation Corps (CCC). The purpose of the CCC was to provide employment and restore our nation’s natural resources.

In 1934, CCC Camp SP-2 was built in the present-day River Cabins area along River Road. A typical CCC camp had barracks, a mess hall, bathhouses and other structures. This camp housed 200 enrollees and staff until 1937 when it closed, and the buildings were razed and used to construct CCC Camp SP-6 at Raccoon Creek State Park in Beaver County.

Work of the CCC in Cook Forest still remains. Indian and River cabins were built, trails and roads constructed and forest resources preserved by these hard-working men.”

Log Cabin Inn: “Cook Forest’s environmental learning center is a large log building built in 1934 by the Civilian Conservation Corps. The center contains displays, taxidermy animals and logging tools from early lumbering days. The center is at one end of Longfellow Trail.”

River Cabins, Indian Cabins, Log Cabin Inn and the Old Contact Station: “In the 1930s, the CCC constructed these buildings from salvaged American chestnut killed by blight. These buildings are on the National Register of Historic Places.”