The bridge over Coos Bay at North Bend OR was constructed with funding from the Public Works Administration (PWA) in 1934-36.  It was one of five PWA-funded bridges over Alsea Bay, Coos Bay, Siuslaw River, Umpqua River, and Yaquina River that completed the Oregon Coast Highway. All but the Alsea River bridge still stand.

The Oregon coast highway was developed after 1914 by the state and county highway departments, but money ran out in the Great Depression before the job could be finished.  With the advent of the New Deal, the PWA offered $1.4 million and a loan of $4.2 million – soon replaced by a state bond issue (the Coos Bay bridge took about half the total funding for the five bridges).  The year after completion of the bridges, coastal tourism in Oregon jumped by more than two-thirds.

The Coos Bay Bridge is the longest of the five PWA coastal bridges, just over a mile long.   The central steel cantilever span is 1,700-feet long and the middle span has a clearance above the bay of almost 150 feet, in lieu of using a draw system. The two towers supporting the truss rise 280 feet above the water.  Their cross sections form a Maltese cross motif.

The rest of the bridge is built in 13 sections supported by concrete arches, seven on the north side and six on the south side, with individual spans ranging in length from 150 feet to 265 feet long.

The roadway is flanked by sidewalks over the entire length of the bridge. At the end, there are parking spaces for travelers to pull over and talk a walk over the bridge.  Ornate stairways lead down to grassy areas below the approaches on both sides.

Glenn S. Paxson was the supervising engineer during construction while chief engineer and designer Conde McCullough took a leave of absence to work on projects in Central America,

The HAER report on the Coos River bridge summarizes the importance of it and all five PWA bridges:

“The Coos Bay Bridge is historically significant as one of the five Depression-era PWA bridges that completed the Oregon Coast Highway. The completion of these bridges marks the dividing line between the period of relative isolation and dependence on sea transportation of Oregon’s southern coastal region to its modern era of land transportation and connection with the hinterland.

The Coos Bay Bridge is also representative of the innovative designs by State Bridge Engineer Conde B. McCullough, a pioneer in American concrete bridge design. The McCullough Memorial Bridge includes early examples of concrete arches constructed using Considere-type hinges. The cantilever truss design also represents McCullough’s attention to aesthetics, in that the upper and lower chords were curved to complete the arch motif of the bridge. The sway bracings of the truss are also curved to give motorists the impression of driving under a series of arches as they travel over the bridge.” (p 1)

The Coos Bay bridge was renamed in 1947 in honor of Oregon’s state bridge engineer, Conde McCullough, after his death.  It was added to the National Register of Historic Places in 2005, along with the other four remaining PWA coast bridges. 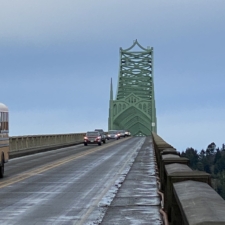 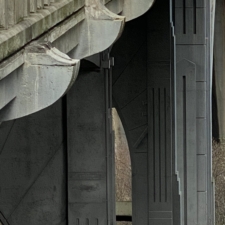 Project originally submitted by Richard Walker on May 28, 2022.
Additional contributions by Judith Kenny.