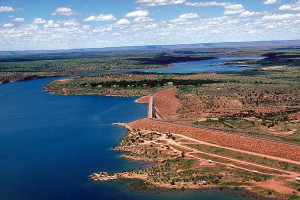 Aerial view of Conchas Dam, impounding Conchas Lake on the Canadian River in San Miguel County, New Mexico, USA. This photograph shows only the concrete water-control structure and part of the earthen structure of the dam. The dam actually comprises three segments, most of which is earth-fill, and is over two miles (3.2 km) in length. The dam is located approximately 30 miles (48 km) northwest of Tucumcari, New Mexico. View is upriver to the north-northwest.

“Conchas Dam is the oldest and one of the largest water projects of the US Army Corps of Engineers in New Mexico. Begun under the New Deal’s Emergency Relief Act of 1935, the construction of the dam and associated facilities provided employment for nearly 2400 people. The WPA supported school teachers for the children of the work crews and after the dam was completed, the work camp provided housing for CCC crews building onsite recreational facilities. Today the headquarters building is still in use, and five other units provide housing for staff.”

The following quotes are all from a 2005 National Register of Historic Places nomination form:

“President Franklin D. Roosevelt approved the Conchas Dam project on July 29, 1935 as part of the Works Relief Program under the Emergency Relief Appropriation Act of 1935. Congress adopted it in the Flood Control Act of 1936 to provide flood control, irrigation, and municipal water supply benefits. The undertaking involved nearly every New Deal program created by the Roosevelt. Both the Works Progress Administration and the Public Works Administration (PWA) were involved with the construction of Conchas Dam, while the CCC built the Permanent Housing and Administration Building and park.” (26)

“Built between 1935 and 1939 by the U. S. Army, Corps of Engineers, the Conchas Dam project was a direct result of the many New Deal Programs designed to put Americans back to work and bring the country out of the Great Depression. In addition to the dam, an 89-building town with all necessary amenities was constructed with adobe bricks. It was later dismantled and the adobe bricks were reused to build the U.S. Corps of Engineer’s permanent housing and an administrative building. They survive, though altered, as part of the legacy of this large New Deal engineering project. In addition to the various construction related programs, two paintings of the dam were commissioned through the Federal Artists Program.” (22)

“Civilian Conservation Corps and other government employees dismantled the construction town following completion of the dam in 1939. The adobe blocks were salvaged and reused to build the Corps of Engineers’ permanent administration building and housing. These buildings stand today as examples of the historic and architectural resources of the New Deal in New Mexico.

After completion of the housing and permanent facilities, the CCC created a small 6.2-acre park of grass and trees adjacent to the administration building. Many of the trees planted still exist today and prompt visitors to delight in the “oasis” in the desert. As a final touch, the CCC again used recycled adobe to build an imposing gateway into the Administration Area.” (23)