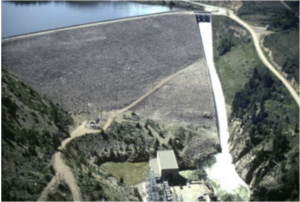 The Colorado-Big Thompson Project (C-BTP) is a massive water storage and transfer project for agriculture, cities and power generation. It involves dams and reservoirs on the west side of the Rocky Mountains’ Front Range to collect water from the upper Colorado River system; a tunnel through the mountains under Rocky Mountain National Park; and a series of storage reservoirs, power plants and distribution aqueducts on the eastern side of the Rockies.

The project extends over a large area of Grand, Larimer, and Weld counties, and portions of four others.

The C-BTP was built and is still managed by the US Bureau of Reclamation (Department of the Interior).  BuRec contracts the water out to the Northern Colorado Water Conservancy District (today’s Northern Water), which sells it, in turn, to irrigators, cities and other local districts.

A feasibility study for the C-BT project was done in 1933-34 and the Public Works Administration (PWA) granted funds for a full plan by the Bureau of Reclamation in 1935.  President Franklin Roosevelt signed off on the project in 1937 and construction funds were appropriated by Congress that year. Meanwhile, the state of Colorado passed legislation allowing the formation of a Northern Colorado Water Conservancy District in 1937.

Construction began on the first unit, Green Mountain Dam, in November 1938 and was completed by 1943. Construction of Granby Dam started in 1941 and of Alva B. Adams Tunnel in the summer of 1940. Work slowed during World War II and all major features of the project were completed by 1956, except for the Big Thompson Powerplant, which wrapped up three years later.

Water is first diverted from Green Mountain Creek into Granby Lake, created by a 300-foot earthen dam across the upper Colorado River and the main source of water for the whole system.  Pumps carry water up to Shadow Mountain Lake (another reservoir) and thence to Grand Lake (a natural lake).  From the east end of Grand Lake water plunges down into the 10 mile-long Alva Adams tunnel and descends 2000+ feet to where it emerges on the eastern slope.  From there, water is diverted through a number of conduits, powerplants and smaller reservoirs until it is distributed far and wide.

The origins of the C-BT project are clearly New Deal, which started all the western slope dams and trans-mountain tunnel.  We are not certain when the eastern facilities were begun, but probably all after World War II.  While we are treating the Colorado-Big Thompson project as a single unit here, there are potentially separate elements.

Such large water transfer projects are controversial, and C-BT was opposed at the time by conservationists.  Today, diversions from the Colorado River all the way down to Mexico are even more fiercely contested as the average precipitation over the watershed has declined and population has grown in the Southwest.  The river’s waters were always over-allocated and the wolf is now at the door.  Nevertheless, Boulder and other cities along the growing Front Range urban zone are still expanding diversions through other transfer projects from the western slope. 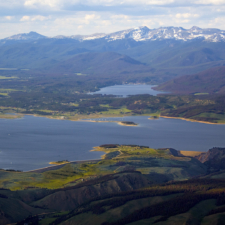 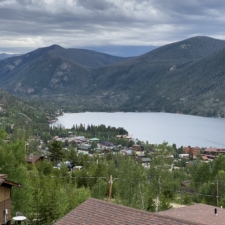 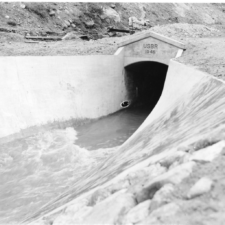 Location notes: Pin drop at Granby Lake, the pivot of the project