Colonial National Historical Park (CNHP) was created by Congress and President Herbert Hoover in 1930 and consists primarily of the Yorktown Battlefield, the historic Jamestown Settlement, and Colonial Parkway.

Several federal agencies participated in its development. The National Park Service (NPS) provided general supervision of the entire historic site project after it was given responsibility for all historic battlefields by President Franklin D. Roosevelt. The Public Works Administration (PWA) contributed at least $600,000 (and probably much more) in funding. Relief agencies provided labor power: the Civil Works Administration (CWA) worked over the winter of 1933-1934 (probably for mosquito control and general clean-up) and the Works Progress Administration (WPA) researched the area’s history and created replica uniforms for museums and reenactments from 1935 on. The bulk of the work, however, was carried out by the African American young men of the Civilian Conservation Corps (CCC).

The African American CCC units performed several years of archaeological work at CNHP. For example, during one excavation, “the site of an old brick and roofing tile kiln was uncovered. A large quantity of roofing tile and partially burned brick were found. The discovery of this kiln definitely establishes the fact that the inhabitants of Jamestown island in colonial days manufactured brick and roofing tile… Numerous articles, including bottles, iron hardware, tools, etc., were uncovered in the course of the excavation” (Daily Press, December 31, 1941).

A 1985 administrative history of the CCC and NPS notes that CCC Director Robert Fechner, in 1935, “praised the archaeological work being done by enrollees… at Colonial National Monument (salvaging two sunken British Revolutionary War frigates in the waters off Yorktown).” A Times Dispatch newspaper article from December 9, 1934 explained: “Part of the labor, in connection with the [underwater archaeology] project is provided by the CCC. These boys operate the pumps, fire the boilers, act as watchmen, and transport relics sent up by the diver to the shore in rowboats.”   The CCC workers even built “an archaeological laboratory and museum” (Daily Press, April 3, 1938).

The work at CNHP is a great example of the CCC’s tremendous and nationwide historic preservation efforts – a significant amount of it carried out by African American enrollees. 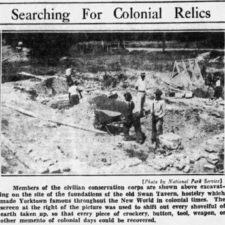 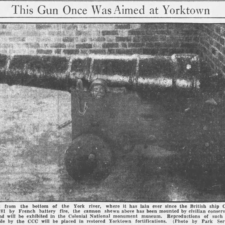