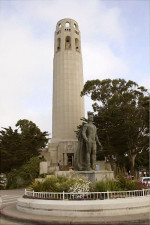 While the structure itself is not a New Deal project, San Francisco’s Coit Tower is the site of a large number of stunning New Deal murals and paintings. Twenty-five artists, supervised by Diego Rivera-trained muralist Victor Arnautoff and funded by PWAP, painted fresco murals on the interior of the tower. The themes of the murals are labor and California life during the Great Depression.

A sign now on display at the tower explains further:

“When Coit Tower was completed in 1933, its interior consisted of over 3,000 square feet of blank wall space. But in early 1934, the building became the pilot project of the Public Works of Art Project (PWAP), and offshoot of the Civil Works Administration, one of the ‘alphabet soup’ of federal agencies that put people to work during the Depression. One of the goals of the PWAP was ‘…to support professional artists and thereby create quality art.’

…Many of the most important Bay Area artists of the time were hired to create the artwork. The twenty-six project artists worked together to support the unified theme of ‘Aspects of Life in California, 1934′, depicting scenes of agriculture, education, urban and rural life, and New Deal idealism. Inspired by the 1920s public art movement in Mexico, the decision to use the medium of fresco for the murals was linked to artists such as Diego Rivera, with whom several of the Coit Tower muralists had worked. In fresco, the artist paints directly onto a wet plaster surface; as the colors dry, the picture becomes part of the wall and any changes must be chipped out. The muralists earned an average of $31.22 per week, completing the project in six months’ time.

…Before the Tower opened to the public, during the politically charged atmosphere of the 1934 Maritime Strike, several murals were negatively described in the press as depicting Communist symbols. Eventually one of the controversial pieces was removed, and the building finally opened to the public in October 1934.” 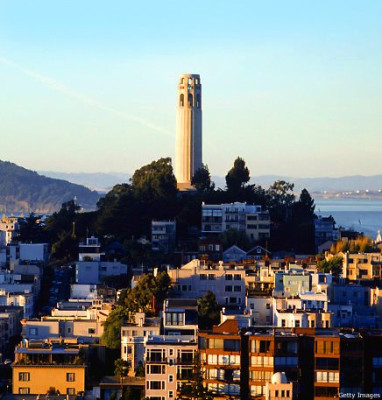