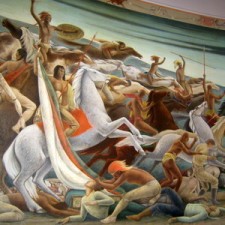 The Clinton Federal Building (north) was originally the US Post Office Department headquarters, completed under the New Deal in 1934.  It contains a wealth of New Deal artworks commissioned and paid for by the Treasury Section of Fine Arts – 25 murals and 22 sculptural elements (12 bas-reliefs, 2 statues, 8 wood medallions) – featuring postal themes.

In 1937, Frank Mechau painted two large (7 x 13′) oil-on-canvas murals for the former Post Office Department Building: “Dangers of the Mail” and “Pony Express.”  They are notable both for their stylistic daring and their controversial subject matter, and they have evoked praise and condemnation since their creation.

“Mechau’s murals have provoked controversy since before they were unveiled in September of 1937. In March of that year, the designs were published in Time magazine and drew some pointed criticism…[for] historical inaccuracies in the paintings….Others were outraged by the indecency of the female nudes  [and for their abstractions] … itself believed by many Americans to be a breach of propriety.”

“…The murals received great praise in some quarters. The press described them as dramatic, poetic, imaginative, and stirring. The president of the Museum of Modern Art, purchased one of the studies for the museum…[Treasury Art Section] director Edward Bruce stated, ‘Frank Mechau’s paintings alone would have justified the entire [arts] program!’ However, condemnation continued. Perhaps most significantly [from] Commissioner for the Bureau of Indian Affairs John Collier….”

“Sixty years after their debut, Mechau’s murals again stirred heated debate when employees of the [EPA] objected to the violence [and] stereotypical depictions of both American Indians and women…. many called for the removal of Dangers of the Mail from the building, while just as many opposed removing or covering the art. A comprehensive interpretive program… was created in consultation with both Native Americans and Frank Mechau’s children.”

“Mechau’s murals and the controversies surrounding them serve as important reminders. First, they vividly render the tragedy of the Indian Wars of the 1860s; second, they recall the degrading stereotypes and social hierarchies that were widely accepted in the 1930s; and finally, they emphasize the difficulties of addressing these issues, and the role of art in public buildings, even today. The murals are evidence that bold art and problematic subject matter often go hand in hand.”

The Mechau murals are located on the 5th floor of the north wing of the building. They are currently (2021) covered up.

The Clinton building is presently occupied by the Environmental Protection Agency (EPA) and  is not freely open to the public. To arrange for a tour of the New Deal murals, email [email protected]. 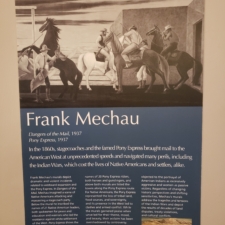 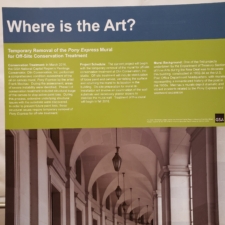 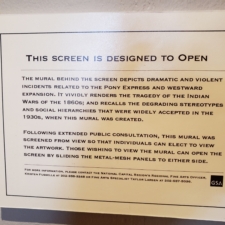 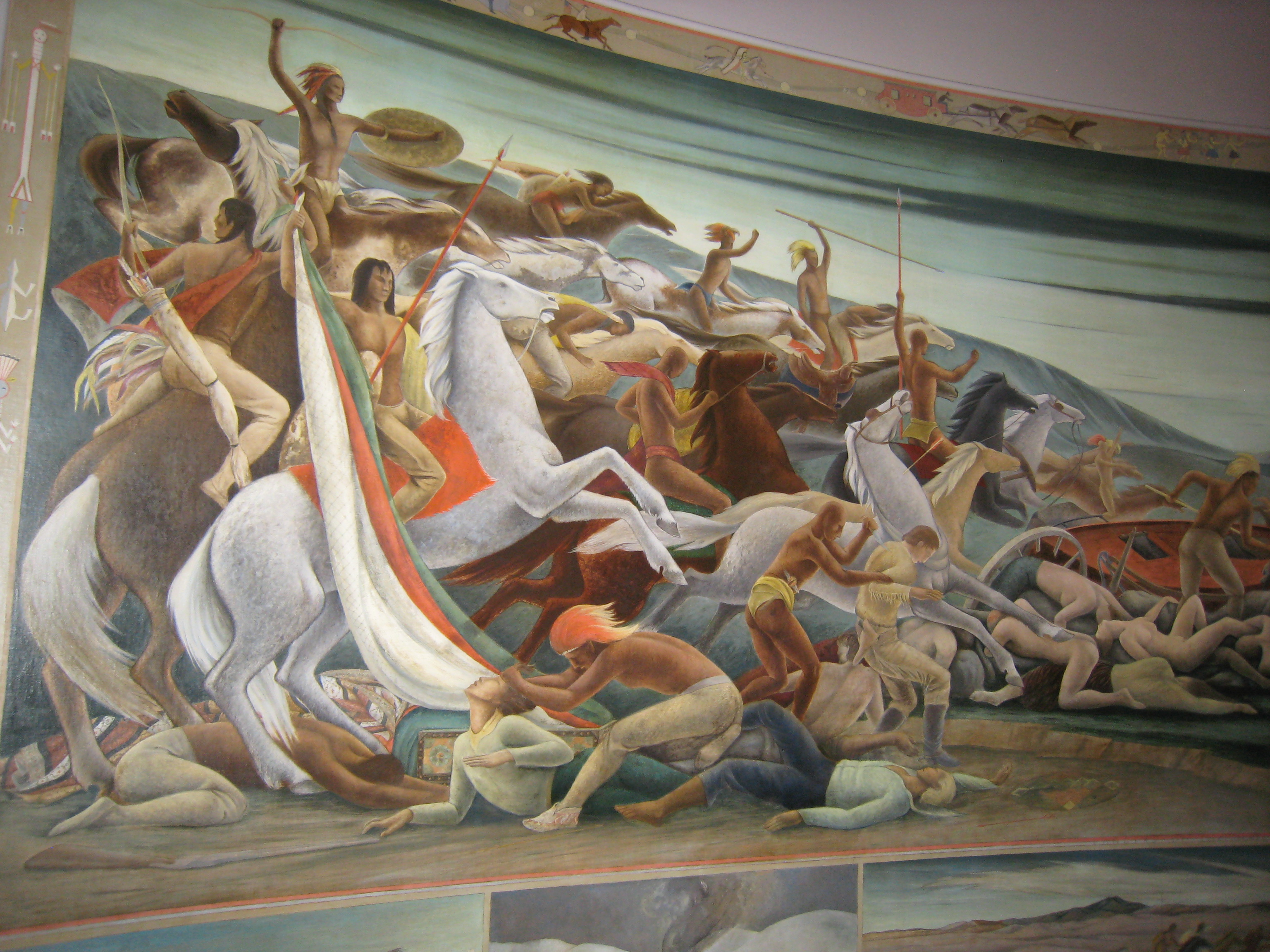 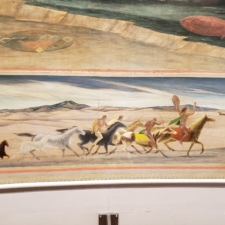 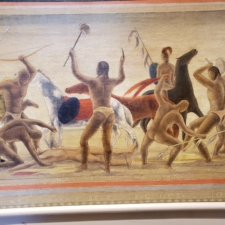 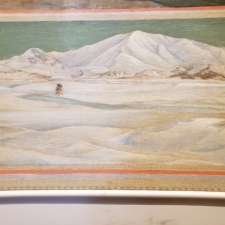 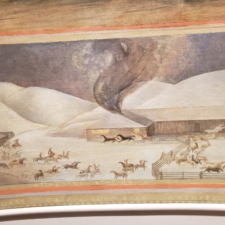 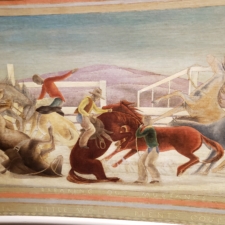 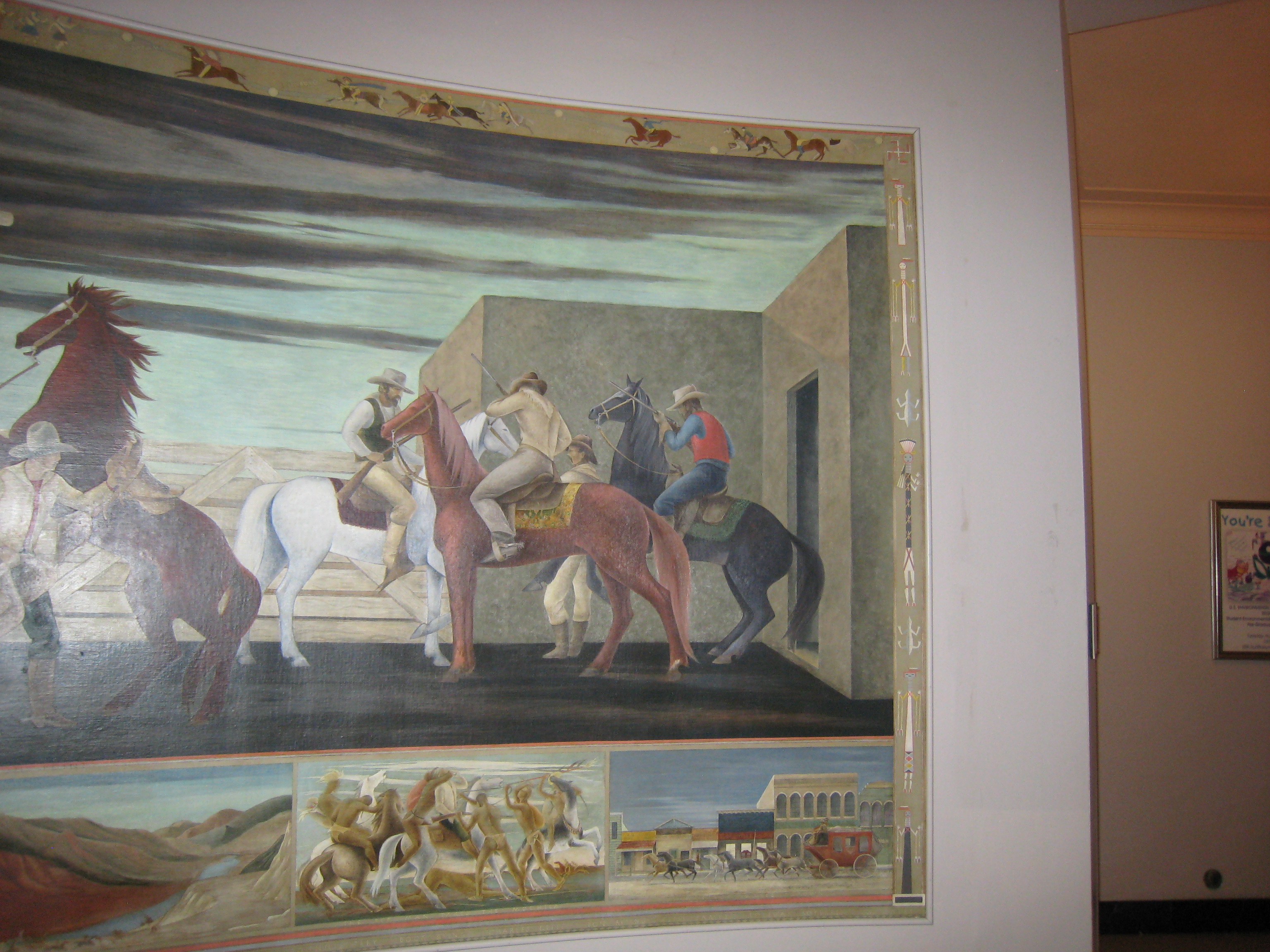 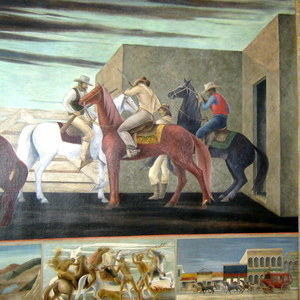