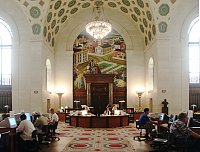 “In Cleveland, William Milliken lobbied for a regionalist painting style. His brand, however, was slightly different from the national version. He encouraged local artists to interpret their immediate surroundings in ways that contributed toward a rapport with the public and a definition of the character and perceptions of Northeast Ohio. Milliken also worked to change early twentieth century public opinion that artists were not bohemians, but were fulfilling an integral function for society. He proclaimed that art will ‘elucidate the history and character of the community.’ Milliken’s museum policies, organization of May shows at the Cleveland Museum of Art, and discussions of regionalism and ‘Cleveland Scene art’ preceded the ascendancy of the American Scene by years. Milliken’s brand of regionalism was less influenced by popular rhetoric and was community service oriented.

When Milliken was selected to be Regional Director of the PWAP and later helped with the FAP, he set out to convince as many public institutions in Cleveland as possible to allow artists to decorate their buildings and to employ as many artists as he could to handle the assignments. Even when Milliken’s term ended in the PWAP, he remained active and influential in other Federally funded art programs. In Washington circles, Milliken was considered one of the most successful regional directors of Federal art in the country.

In the first week of the PWAP in December 1933, Milliken was able to employ 72 artists. They immediately began creating work for such public buildings as Cleveland Public Auditorium and the Cleveland Public Library. For these first murals, Milliken and a small committee chose the region’s most talented artists. Ora Coltman’s mastery of urban scenes earned him the commission of a mural triptych entitled ‘Dominance in the City.’ William Sommer’s colorful palette was perfect for the mural, ‘The City in 1833,’ which still decorates Brett Hall in Cleveland Public Library. In the spring of 1934, Milliken put on the largest local display of PWAP work (ceramics, sculpture and paintings) in the Armor Court of the Cleveland Museum of Art. More than one-third of the works displayed were chosen for a national exhibition in Washington DC, the largest percentage chosen from the entire country. Milliken’s success was hailed by Edward Rowan, who said the Director took care of more artists in his Midwest region than any other and that work was done here at the highest standard.

Milliken could not have accomplished all of this single-handedly. Cooperation by other public officials also played a role in this success. Linda Eastman, Director of the Cleveland Public Library, shared Milliken’s taste for regional art and sense of community service. She believed in the value of utilitarian art—that it was not only a source of pleasure for people, but had the potential to be educational as well.36 Additionally, Milliken encouraged Ernest Bohn, Director of Public Housing, to create murals for community rooms in Valleyview Estates, Outhwaite Homes and Lakeview Terrace, all built in the late 1930s. While some concern arose about how to pay for the mural work, Bohn successfully convinced the USHA (United States Housing Authority) to hold aside a small percentage of construction funds (0.5 of 1%) for art expenditures. In addition to these publicly funded murals were a few private commissions stimulated, in part, by the successes of Milliken’s efforts and interest in Social Realism. The best known of these commissions is ‘Freedom of Speech’, a mural at the Cleveland City Club, painted by Elmer Brown in 1942. The robust figures and strong earth tone colors clearly reflect the influence of the Mexican fresco style.

Another lesser known, but notable, project is the History of Railroading painted by Earl Neff in 1937 for the entrance lobby of the Brotherhood of Locomotive Engineers Building. This monumental work consists of fifteen panels, each depicting a stage in the development of railroad transportation in the United States. The simple figures, strong compositional patterns, and the sheer size of the mural (approximately 100 running feet) make it quite dramatic. The mural was removed from the Engineers’ Building in

1989 when the building was demolished. Gordon Gund had it restored and moved to the Depot Room of Gund Arena (now Quicken Loans Arena). Recently, the new owner of the arena removed the mural during a renovation and it has been donated to the Cleveland Artists Foundation.”