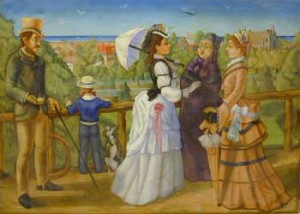 Joseph Egan painted this mural “Old Reservoir Walk” in 1933-34 with funding from the PWAP. It is an oil on burlap, 60 x 84 inches mural. It was originally installed at the Carnegie West Branch.

Location notes: Located on the third floor of the main library.