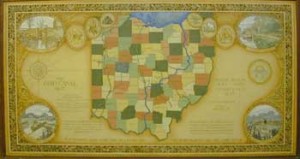 August Biehle painted “Ohio Canal” in 1934 with funding from the PWAP. It is a 113″ x 60″ oil on canvas mural. It was formerly on the 3rd floor of the Main Library and the East 131st Street Branch, and is now in the Main Library’s Fine Arts Department.