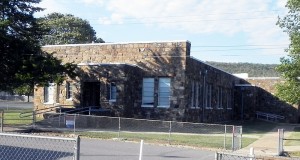 “The auditorium was constructed as a Works Progress Administration (WPA) public works project in 1936-1937, during the Great Depression. It provided much-needed jobs in the Clayton area, which had been economically ravaged.

The building was nominated successfully to become part of the National Register of Historic Places in 1988. Justifying its inclusion was its unusual Art Deco allusions—uncommon among WPA buildings in the region—and its purpose as a sole-use auditorium.”