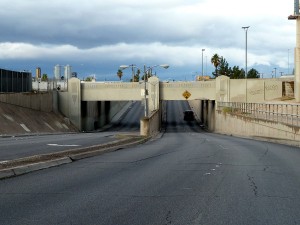 Las Vegas’s Sun reported in 2004:
“The underpass, the first structure of its type in Nevada to be listed in the [National Register of Historic Places], was built in 1937 by the Depression-era Works Project Administration. Preservationists say it’s important because it brought what is now West Las Vegas together with the rest of the city. The city used to be split by the rail line, which was then elevated.

The underpass was one of 78,000 bridges constructed under the Works Progress Administration.

The original structure has already been altered due to the widening of Bonanza Road, which was Clark Avenue until the 1940s.”