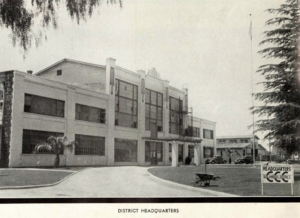 In March 1936, the U.S. Army leased the Robert Morton Company building and property at 6001 Van Nuys Boulevard, Van Nuys, California, to serve as headquarters for the newly-created Los Angeles District of the Civilian Conservation Corps (CCC).  The Robert Morton Company had been a producer of pipe organs and closed its business in 1933.

After remodeling the interior, the building was dedicated to its new mission on May 21, 1936. The entire property was described as “one block square with a 222-foot frontage on Van Nuys boulevard, and extending 55 feet west to Vesper Street. There are two main buildings on the property, aggregating 78,000 square feet of floor space. The main building, facing Van Nuys boulevard, is two stories high with a part mezzanine on the second floor. It was built in 1913. The rear building is one story steel-frame construction with concrete block filler walls and was constructed in 1925. There are also several minor buildings on the property” (CCC Annual, 1938).   The main building was typical of L.A. industrial architecture of the interwar period, probably with Art Deco touches added in the 1920s.

After the dedication ceremony, area youths who enrolled in the CCC were taken by train to the Van Nuys headquarters, given a physical exam, and sworn in, “Then, after being completely outfitted with clothing and accessories, the enrollees are sent out the same day to camps in various parts of the State” (Los Angeles Times, 4-17-1939).

The Los Angeles District headquarters had its own contingent of CCC enrollees, too. From about 1936 to 1938, 140 CCC youths, housed on the second floor of the main building, worked alongside 16 army officers to administer the Southern California CCC district, “an expansive territory bounded by Santa Maria, the Mexican border and Death Valley” (The Van Nuys News, 1-11-1937).

Additionally, the CCC enrollees stationed at headquarters did some field work. For example, “Figuring prominently in the fire fighting [at Malibu] was the contingent from Civilian Conservation Corps headquarters in Van Nuys, which has been in action since the conflagration first started” (The Van Nuys News and Valley Green Sheet, 9-10-1936).

The CCC ‘boys’ at the District Headquarters had other opportunities, such as earning high school credits, typical of CCC programs.  “Men at Van Nuys headquarters are particularly interested in extra-curricular work, such as painting and murals, wood and linoleum carving, leather tooling and model ship building” (The Van Nuys News, 1-11-1937).

The building and property at Van Nuys Boulevard served as the Los Angeles District headquarters from at least 1936 to 1940 and possibly all the way to the end of the program in 1942.

It seems that all of the buildings have since been demolished. 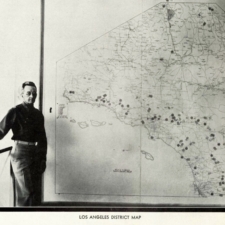 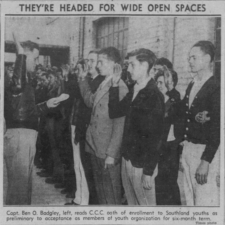