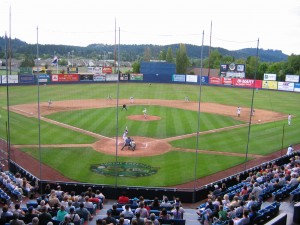 “Civic Stadium is an outdoor athletic stadium in Eugene, Oregon, owned by the Eugene School District.

Civic Stadium, the vacant stadium located near East 20th Avenue and Willamette Street,[2] adjacent to South Eugene High School, has a seating capacity of 6,800. The stadium was built in 1938 through a public-private partnership between the Eugene Area Chamber of Commerce, Eugene School District 4J and the federal Works Progress Administration;[3] it has been owned by the Eugene School District since its construction.”   (wikipedia)