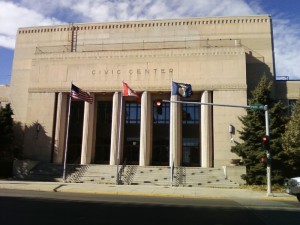 Clean lines, formal monumental openings, and restrained revival details mark the 1939 Great Falls Civic Center as a municipal Art Deco style building. The Works Projects Administration provided most of the funding for the building. The Depression-era federal jobs program employed people doing everything from local history research to public works projects. Since WPA funds could not be used to purchase land, the city situated the Civic Center on parkland, angering residents who wanted to preserve Great Falls’ beloved Gibson Circle at the end of Central Avenue. A lawsuit that went all the way to the state supreme court failed to save the park. Despite the controversy, the completed building filled a real need for a governmental and recreational center. Prominent Great Falls architects George Shanley and Johannes Van Teylingen collaborated on the modern design. The interior, ornamented with terrazzo, Art Deco details, and travertine plaster, still houses city offices and an eighteen-hundred-seat auditorium. The original ice rink was converted into a convention center in the 1980s.