City Terrace Park was planned in 1931 but the park space wasn’t completed until 1933, when crews of workers from the Works Progress Administration* finished cutting into three and a half acres of rugged hillside, creating terrace space for the new city park.

* While sources cite the WPA, the agency was not established until 1935. 1933 efforts may have been undertaken by a predecessor agency, the Civil Works Administration (CWA). 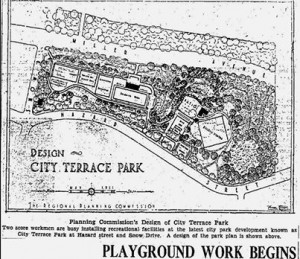 Original 1931 park plans as shown in the Los Angeles Times.

“Since the initial development in the early 1930’s, it remained unchanged for 20 years. In 1957, 600,000 cubic yards of soil removed from the construction of the L.A. City Civic Center were transported to the park and used to fill a ravine that bordered the park, tripling the park’s acreage.” 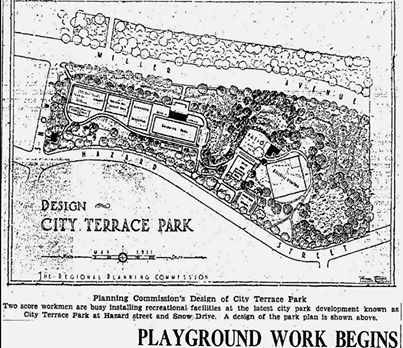 Help Us Map the New Deal
with Our Mobile App

The Living New Deal online map is making the legacy of New Deal public works and artworks visible to the public. We have crowdsourced thousands of sites, but that’s just the tip of the iceberg.  Now, the free Living New Deal app for iPhones makes the job of documenting New Deal sites easier. New Deal sleuths can photograph their discoveries, add text and audio, and submit their findings automatically (with GPS coordinates), to be added to the national map. Users can switch easily between app and map to get oriented and find previously documented sites.