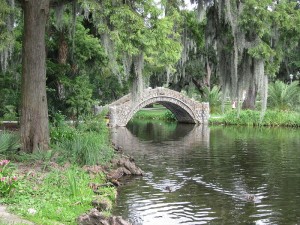 The Wikipedia entry on City Park provides a good summary of park history, including the role of the WPA in making improvements to the park:

City Park was established in the mid-19th century on land fronting Metairie Road (now City Park Avenue), along the remains of Bayou Metairie, a former distributary of the Mississippi River…

In the first two decades of the 20th century, numerous improvements were undertaken by the City Park Improvement Association. Notable park landmarks like the Casino, the Peristyle, Popp Bandstand, Lelong Drive and the Issac Delgado Museum of Art were constructed. City Park’s governing board also accomplished a number of large land acquisitions, such that the park assumed its current boundaries.

A master plan, by Bennett, Parsons & Frost of Chicago, was commissioned to guide the development of the greatly enlarged park; this plan was largely implemented in the 1930s by federal relief agencies, such as the Works Progress Administration.

Substantial improvements were made to the park’s newly-acquired land by the Works Progress Administration, including the installation of many sculptures by WPA artist Enrique Alferez, construction of buildings, bridges, roads, and much of the electrical and plumbing infrastructure that were still serving the park when Hurricane Katrina struck in 2005.