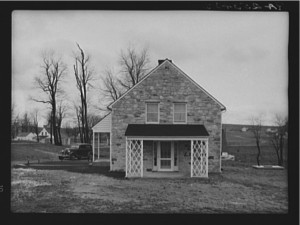 “Arthurdale was the first of many New Deal planned communities established under Franklin D. Roosevelt’s administration.[2] It was intended to take impoverished laborers, farmers, and coal miners and move them to a modern rural community that would allow them to become economically self-sufficient…

Mrs. Roosevelt was so passionate about the concept that she brought it to the attention of her husband, who decided to place the project under the direction of the United States Department of the Interior.

Construction began at the end of 1933 and from the outset it was clear that the Arthurdale community had become one of Eleanor Roosevelt’s chief priorities. She intervened with Interior Secretary Harold Ickes and with others to ensure that the Arthurdale homes were built with modern necessities such as insulation and indoor plumbing. For some time she acted in the capacity of a micro-manager for Arthurdale, contacting people who could help bring jobs to the community, raising money and awareness, even monitoring the budgets with a close eye. Roosevelt spent most of her own income on the project in its early years; philanthropist Bernard Baruch was also a major contributor.[3]

While Eleanor Roosevelt saw Arthurdale as an exciting new chance for the government to provide destitute citizens with the foundation for successful, self-sufficient lives, the project soon faltered on budgetary and political grounds…

In 1938 Franklin Roosevelt delivered the only high school commencement address of his Presidency at Arthurdale. Eleanor Roosevelt continually visited the area, attending graduations, dances, and other gatherings, but always monitored the progress of construction as well…

The Arthurdale experiment was widely remembered as a failure.[11] However, Roosevelt personally considered the project a success, later speaking of the improvements she saw in people’s lives there and stating, “I don’t know whether you think that is worth half a million dollars. But I do.”[11] Eleanor Roosevelt returned to Arthurdale for the last time in 1960 to speak at the dedication ceremony of a new Presbyterian Church. The community itself continues to exist today, with many of the original structures still in use more than seventy years later.”