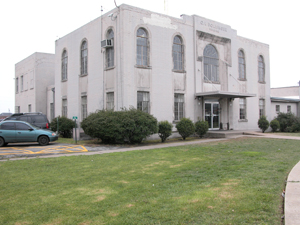 “West Memphis experienced dramatic growth during the 1930s due to increased automobile traffic, industrial development, and the presence of river and railroad transportation.  In June 1938 Mayor William H. Hundhausen appointed a committee to determine necessary city improvements.  The committee immediately suggested the construction of a city administration building, which would house the city hall, a fire station, and a city jail.  Prior to 1938, the city council met in various local businesses and fire protection was sub-par.  The mayor’s committee enlisted the support of the Public Works Administration (PWA) in order to fund construction of the city administration building.  The West Memphis City Hall, located at 100 Court Street, opened its doors on July 18, 1939, after about one year of planning and construction.  A courtroom addition was completed in 1955, and a jail annex was constructed in 1960-1961.  The West Memphis City Hall is being nominated to the National Register of Historic Places under Criterion A with local significance for its association with the development of municipal services in West Memphis and for its association with the PWA.

The PWA initially approved a $16,500 loan and a $13,500 grant for the city hall project and later approved another $14,000 grant. A city ordinance was passed to issue bonds for the remaining construction costs. A site for the city hall was chosen just to the southwest of the busy intersection at Broadway Avenue/U.S. Highway 70 and Missouri Street. The city hall would be built on a semi-circular drive called Court Street on the south side of Broadway Avenue. R. D. Eberdt was the architect and engineer for the project. Construction began on July 29, 1938, with a crew of fifty people. The building plans called for two-story front and rear wings connected in the center by a one-story corridor. This would separate the city offices in the front wing from the fire department and city jail in the rear wing. The city hall was completed on June 13, 1939, and officially opened on July 18, 1939. The city jail was ready for occupation in August, and the first city council meeting was held in the building on September 3, 1939.“