The Public Works Administration (PWA) provided about half the funds for construction of the original city hall in San Leandro CA – which had only recently incorporated as a city in 1933.  City Hall was built in 1938-39 and dedicated on June 22, 1939.

Available sources disagree on the cost of construction and PWA funding.

In late 1938, the Daily Pacific Builder reported that construction was to begin on the San Leandro City Hall the following month for a cost of $105,877.  By contrast, a 1940 city brochure declared that, “In August of 1938, the voters bonded the city for $185,000 for a new city hall and new sewage and garbage disposal plant, to cost a total of $335,000, the difference being provided by the federal government in PWA grants.”   The official history on the city’s website disagrees with both these sources, saying:  “In June of 1938, the City was awarded a Public Works Administration (PWA) grant of $300,000. This money and bond money approved by a citizen vote helped fund the construction of a fine new City Hall…. Construction was completed on this impressive building March of 1939.”

We believe the PWA provided something more like $150,000, given the city bond issue, and we cannot be sure how to split the funding for the city hall and a sewage plant.  Further verification is needed.

City Hall is an elegant example of Classical Moderne, designed by Irwin M. Johnson. It features a grand central entrance with columns, decorative elements suggesting columns on the sides of each window opening, and elegant metalwork over the entrance and all the windows.  A decorative filagree along the (flat) roof line suggests an Italian Renaissance cornice.

Two large wings have been added to the New Deal-era building and a new police station built to the south of the enlarged city government complex.  It appears that sections of decorative trim from the side of the original building were used in finishing the police headquarters. 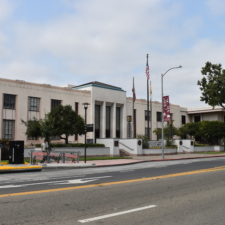 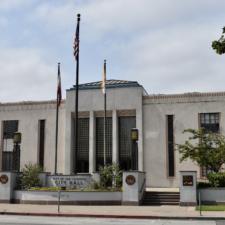 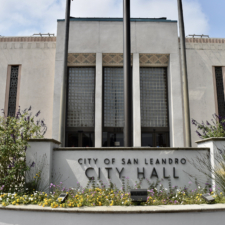 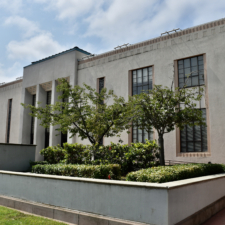 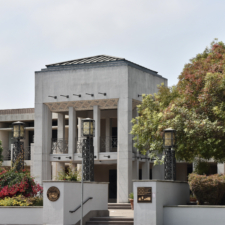 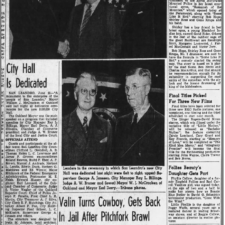