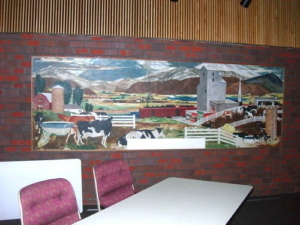 “North Platte Country against the Mountains” was painted by John H. Fraser in 1940 for the Littleton post office, commissioned by the Treasury Section of Fine Art. It currently hangs in the City Hall.

“When the post office underwent renovations in 1962, the mural was removed, rolled up and stuck in a corner in the post office. It was discovered in the 70s, restored and installed in 1985 in the Littleton City Hall.” ( Jimmy Emerson, here)