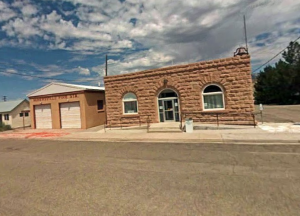 Built by FERA and the CCC

“One such building was the Minersville City Hall funded in Beaver County by FERA. It was built in 1935 to house the town’s post office, library, municipal offices, and Daughters of the Utah Pioneers camp. To save costs, stone for the hall was brought from a demolished building of the old Murdock Academy, which had been standing empty since 1922. Civilian Conservation Corps crews dismantled and hauled the stone to Minersville.”