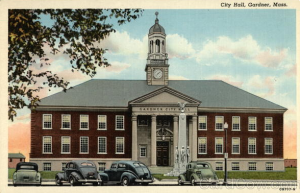 Gardner, Massachusetts’s city hall as constructed with the assistance of federal Public Works Administration (P.W.A.) funds. The building is still in service.

The construction of a new city hall was first mentioned by mayor Fred E. Perry in his 1938 inaugural address. He said he had many plans for the city, “the chief of which was the erection of a new city hall which would be combined with a memorial to the World War veterans.” The actual construction of the building could not be started at the time due to the financial constraints that the city faced. Eventually they were able to enlist the aid of the Public Works Administration.

The building was designed by architects Wells, Hudson, and Granger. The construction of city hall cost thirty-six cents per cubic foot, and was built based off a colonial design with brick construction. The building was built to be fireproof, but also included a sprinkler system, because even though the building itself reportedly could not catch on fire, the objects inside the building would still be flammable. It was also equipped with emergency gas lighting and electric clocks, which was very technologically advanced for the period. The interior auditorium sat 1,159 people. There were no major glitches in construction, but the Gardner City Council held a special session on January 5, 1940 because they needed to ask the PWA for a sixty-day time extension on the grand opening because some electrical fixtures were not in place, some of the necessary equipment was not delivered, and storage space under the stage for the seats in the auditorium was not originally planned for in the blueprints of the building.

Ultimately it was completed on January 20, 1940 and a large dedication ceremony was scheduled. The ceremony was to take place rain, shine, or even snow, and began at two in the afternoon with a flag raising ceremony. This was followed by an inspection, formal dedication, and dancing. The inspection took place from two-thirty to five in the afternoon, and then recommenced at six after a break for dinner, the inspection went until seven. After the inspection Owen A. Hoban, Attorney General Paul A Dever, and Mayor Fred E. Perry, each addressed the crowd. (Mayor Fred E. Perry also received special approval from the city council to hold his 1940 inauguration at the dedication ceremony.) Dancing followed this formal dedication with music by the Hamiltonians.

Many residents of the city were very happy with the new city hall, and over ten thousand came to the dedication ceremony. A building such as this was a huge deal for a small city such as Gardner, Massachusetts. Many in the city were out of work during the Depression because at the time the main employers in the city were furniture factories. When the Depression hit and everyone lost his or her money, no one could afford to buy new furniture. The construction of city hall not only provided many jobs in the city, but it also would have pumped money back into the local economy, and helped out the dwindling furniture business because the new building needed new furniture. After the completion of the new city hall, the old city hall was turned into an armory with assistance from the Works Progress Administration.

The Gardner City Hall is still in use today and very little has changed about the appearance aside from minor updates and improvements. The building was constructed by contractors Wells, Hudson, and Granger