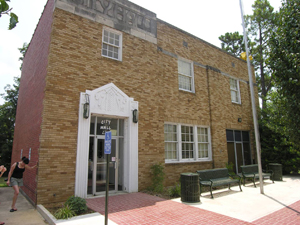 Construction began on the building on June 30, 1936, and the design for the building was the creation of Little Rock architect A. N. McAninch.  McAninch designed many buildings for PWA contracts.  Additionally, many of his buildings were designed in the Art Deco style, including the Hempstead County Courthouse (NR listed 5/19/1994), Rison High School (demolished) and St. Anthony’s Hospital in Morrilton, which was originally intended to be a PWA project (NR listed 3/28/1986), although he did use other styles, such as the Gothic Revival for the First Baptist Church in Little Rock (NR listed 8/9/1994).

T. A. Lusinger was the contractor for the building and once construction began, it did not take long for the building to be completed.  Construction was completed less than three months later on October 7, 1936.  The completed building was a good example of the Art Deco style, including decorative geometric and stylized motifs.[5]  The city moved into the building in late 1936, and the building remains in use as city hall today.

Modifications to the building have been minor since it was completed in 1936.  Sometime after 1979, the original front entrances to the building, which were wood doors with multiple panes of glass, were replaced with the current metal plate glass doors.  In addition, a siren has been added to the southwest corner of the building.