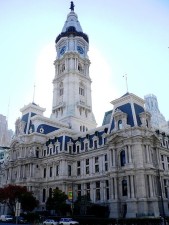 “Beautification of City Hall itself was begun in the autumn of 1936, when a large crew of WPA workers started the gigantic task of cleaning the million square feet of stone composing the building’s exterior. Twenty tons of pipe and 25,000 feet of lumber were used in the scaffolding, erected to a height of 150 feet. Fifty thousand gallons of specially prepared paste were used in one of the largest cleaning jobs ever attempted.”