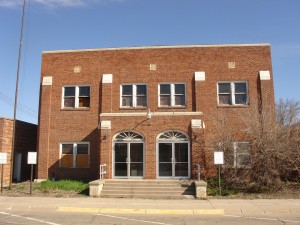 On July 25, 1935, the Ainsworth Star-Journal announced that plans were in the works for a new city hall. The Ainsworth City Council had tentatively approved plans for the new building, drawn by Architect J. F. Reynolds of Lincoln. A bond election was required in order to apply for the Public Works Administration (PWA) grant program, and a petition was quickly circulated to ask the city to hold the election. Of those asked to sign the petition, 97 signed without question and only one refused outright. The new city hall building already had a great deal of support, having been endorsed by the newspaper, the Commercial Club, the Woman’s Club, and other city organizations. The city council met in special session to discuss the issue of a bond election, and the date of the election was set for September 3, 1935.

In an editorial in the Ainsworth Star-Journal, the editors heartily sanctioned the building of a new city hall. Prior to this movement for a city hall, the citizens of Ainsworth had at times sought to build such a facility, however the broad support for the expense was not present. Under the PWA grant, the cost of the building to the citizens of Ainsworth would be halved, and a low interest loan for the remainder could be supplied by the federal government. Having not had a city hall or fire hall prior to this building’s construction, the city council had to rent space to have meetings and to store city records. Additionally, the police were forced to take arrested persons to the county jail, at the city’s cost. The new building would be able to serve all these purposes, and more. On August 29th, the editors of the newspaper gave the matter one last endorsement, saying that Ainsworth could either keep progressing and growing by building a new city hall, or it could begin its backward decline. Given the options, on September 3, 1935, the voters of Ainsworth agreed to the bond issue.

In early November 1935, the city council approved the final plans for the city hall building and ordered the publication of the Notice to Bidders. Plans called for the bids to be opened on November 22nd, and the city council found that the bids were between $7000 and $13,000 over the budgeted amount. The bids were rejected, plans reconfigured, and new bids were requested. Upon receipt of the new bids in January, J. C. Jensen of Ainsworth was awarded the general contract.

The building, as designed, was planned to measure 52 feet, 2 inches by 103 feet, 6 inches. The upper floor would house the auditorium, complete with a stage and a balcony and seating for 800. The fire equipment would be housed under the stage at the rear of the building. The basement would contain the jail, the heating plant, and the City Council chamber, along with storage vaults for the city’s files. An additional two rooms, 20 by 30 feet would be left unfinished, and could be used for all kinds of community meetings and events.

Before the auditorium was completed, plans for events were being made for the auditorium space. James Finney and Henry Miller requested permission of the City Council to hold dances at the auditorium twice per week. Permission was granted, and the first dance was very well attended with over 500 appearing to celebrate the new facility’s completion. The dance was held on a Tuesday night, on November 10, 1936, and delegations from other communities attended. Glen Buhl and his Orchestra provided the music. Permission to use the auditorium space might be granted by the City Council to anyone, but if the event was to raise a profit, the renter would have to pay the city $15.00 for the privilege. Non-profit activities could be held free of charge.