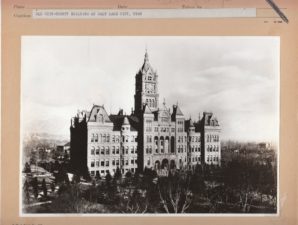 It is likely that the PWA conducted repairs on the 1894 City and County Building in Salt Lake following an earthquake in 1934, considering that the building appears in the PWA archives. More information is needed to confirm.

From the National Register of Historic Places: “There are four entrances, the west side being the main one. In design it corresponds to the east entrance, as the south and north approaches correspond to each other in a simpler design. Above each of them there used to be a statue; the east and west were crowned by a statue of Commerce, on the north was a statue of Liberty, on the south a statue of Justice, while the tower was crowned by a statue of Columbia. The 1934 earthquake tilted the Columbia, and it was taken down. The others followed suit when they became a hazard.”