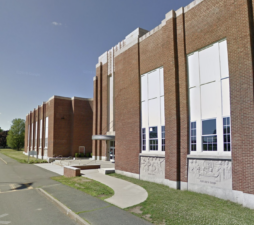 Citizen Genet School in East Greenbush, New York was constructed as a Public Works Administration (PWA) project from 1939-40. The building bears a 1939 cornerstone. Originally a high school, the facility now houses an elementary school and central offices. Striking reliefs along the front of the building (five on each side of the main entrance) depict the attributes of society the students should strive to attain. The ten reliefs depict, respectively:

According to the East Greenbush Central School District, “As the United States of America was clawing its way out of the Great Depression, a controversial project to build a $1 million school in East Greenbush and centralize the surrounding towns’ students into a K-12 building moved forward […]