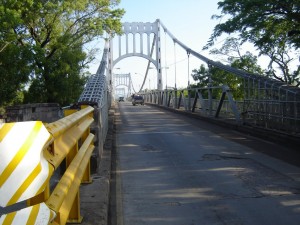 The November 1935 issue of California Highway & Public Works reported on New Deal work in the country of Honduras.

“PRESIDENT ROOSEVELT has approved a program of bridge construction work on the route of the Inter-American highway in Central America, the U.S. Bureau of Public Roads in charge of activities on the highway announces, Congress in June 1934, appropriated $1,000,000 to meet such expenses as the President in his discretion may deem necessary to enable the United States to cooperate with the several governments, members of the Pan-American Union, in connection with survey and construction of the proposed Inter-American Highway, As the initial activity under this program, the Bureau of Public Roads has undertaken the construction of several bridges in Panama, Guatemala, and Honduras, the estimated expenditure being $340,000.

LOCAL PARTICIPATION
The other country will furnish all local materials, labor and transportation incident thereto, together with rights of way, and labor needed in constructing foundation, substructures, and grading approaches for a distance sufficient to complete the stream crossing and make the structure usable. The Inter-American highway route traverses Mexico and the republics of Central America, its termini being Nuevo Laredo, Mexico, across the Rio Grande from Laredo, Texas, and Panama City.”

Note: Near the bridge is a street named after the US President, Calle Franklin D. Roosevelt