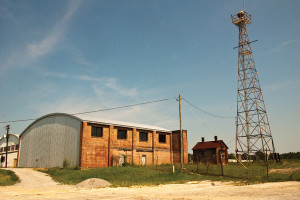 The Chilton County Airport, also known as Gragg-Wade Field is a small public airport in Alabama:

“Many people don’t realize just how significant a place in history the Chilton County Airport holds. It was constructed in 1937 as part of the New Deal’s Works Progress Administration.

That opening weekend was quite a spectacle. Held over the July 4, 1937 weekend, the Chilton County Airport began its service with a bang…

During the Second World War, the airport was utilized by the government to train people with an interest in aviation how to fly, with the understanding that they would be called upon if needed during the war.

Following the war, the airport saw action as an emergency landing field on Commercial Airmail Route 40 (Site 27) between Memphis and Tampa, Fla. The airport’s hangars were also used for various community functions and social events…

The four buildings, better known as the Gragg Field Historic District, were listed on the National Registry of Historic Places on June 2, 2004, but over the years, the airport fell into a state of disrepair. The original WPA hangar became unusable, as did the original light tower and power shed. Things go so bad that, in 2007, the three buildings were listed as the “most endangered historic places in Alabama.”

In 2009, however, a group of pilots came together to fund renovations, and in 2010 the WPA hangar was reopened to house aircraft for the first time in more than 60 years.”   (http://peachlivingmagazine.com/?p=145)