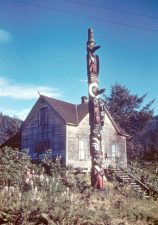 Tlingit craftsmen enrolled in the Civilian Conservation Corps (CCC) restored the Raven Pole in 1940. The restoration was part of a larger U.S. Forest Service program focused on the restoration of totems and Native cultural assets. Seven of the poles surrounding the Clan House at the Chief Shakes Historic Site are reproductions of older poles, while two are originals. All were carved in 1940 as a Civilian Conservation Corps project.

Harry Corser describes the symbolic meaning of the Raven Pole motifs in his 1910 volume, Totem Lore of the Alaska Indians. “The totem is surmounted by the Raven Creator. On the older poles he is represented as a man. The hat is supposed to be a copy of one that the young Raven saw in the Creator’s house. The box is a chief’s box, supposed to have spiritual power, and was used in potlatch feasts. The Raven’s beak is bent. There is another legend, however, which explains the same phenomenon by saying that the Raven once disguised himself as a fish and that a fisherman caught him and pulled off his nose. Afterwards by a trick he found out where the nose was and by another trick secured it and put it back on again, but did not get it on straight. After the flood the Raven disappears from his tory. Below is the young Raven, the Creator of man. He is represented as a raven with a man between the wings. This is to show that he could become a raven or man at will. Below is the daughter of the Creator and the mother of the young Raven. The lowest figure of all is Hi-yi-shon-a-gu, the Indian Atlas, who holds up the earth. Hi-yi-shon-a-gu was the first mother of the Raven before his reincarnation.”