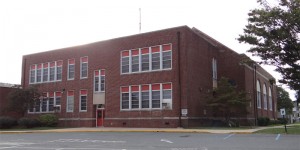 Contracts for the construction of two high schools in Cecil County (Cecilton and Chesapeake City) were awarded to to Lang Brothers of Baltimore by the PWA in December 1938.  The $134,800 contract for the Chesapeake City high school called for “a two-story and part basement [consolidated school building], designed to take care of 490 pupils.”

According to The Cecil Democrat, the contract called for “modern heating, plumbing, and electrical work.” The facilities were as follows: