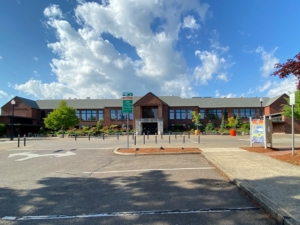 As indicated by the Newberg Area Historical Society marker on site, a $15,000 Public Works Administration (PWA) grant allowed the Newberg School District to secure a $35,000 bond to build this brick building, occupied currently by the Chehalem Cultural Center.

The New Deal era Central School (1935) replaced a wooden school building at the same location that dated from 1889. As early as 1933, the structure was declared a fire hazard. Newberg voters approved raising funds for the new school in 1934 with the necessary bond secured by the PWA grant.

H. J. Settergren, a Portland area contractor, built the new Central School in 1935 for approximately $50,ooo. Unreinforced hollow clay tiles were used to construct the fire-proof one-story school, which was decorated with an exterior brick veneer. The school opened its doors to students on September 23, 1935. Because of its full-sized basement windows, over time the building could be used as a two-story facility with its basement converted to classroom use.  With additions made during the 1950s, it served as a school until 1995. At that time, it no longer met the capacity required by the Newberg School District.

The Chehalem Parks and Recreation District subsequently acquired the building and renovated the structure in 2003. In addition to seismic upgrading, the building received a new front entrance at that time.