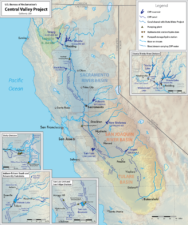 The Central Valley Project (CVP) was originally conceived of in the 19th century, but took shape as the “State Water Project” in 1919.  The federal government turned it down in the 1920s, after which it gained approval from the state legislature in 1933.  The Great Depression made it impossible for the state to sell the bonds to finance the system, however, so the federal government stepped back in. Initial financing was provided under the Emergency Appropriations Act of 1935 with the Army Corps of Engineers in charge, but control and construction passed to the US Bureau of Reclamation in water project legislation by Congress in 1937.

The CVP includes about ten major and ten lesser dams for water storage, flood control and power generation, along with several canals and aqueducts for water delivery.  The keystone is Shasta Dam and Reservoir on the upper Sacramento River. The major features are: (1) the Friant Dam on the San Joaquin River, plus the Friant-Kern Canal to deliver water to the south end of the San Joaquin Valley; (2) the Delta-Mendota Canal and pumping station at Clifton Court forebay to deliver water south from the Sacramento-San Joaquin Delta; (3) Folsom Dam and Lake on the American River; and (4) Trinity Dam and Reservoir on the Trinity River, to provide extra storage and delivery into the Sacramento River system.

The CVP has a storage capacity of roughly 13.5 million acre-feet (MAF) and delivers an average of 7 MAF per year to irrigators up and down the Central Valley of California.  It also feeds water into the urban water systems of the east and south parts of the Bay Area. But its principle purpose is to allow irrigation during the dry summer months in the Sacramento Valley and Delta and to pump water south to the much drier San Joaquin Valley.

The only pieces of this gigantic system to be built under the New Deal were Shasta Dam, Friant Dam and the foundations of Keswick Dam (a flow control structure just downstream from the much larger Shasta Reservoir). All the rest were built after World War II up through the 1960s.  The Bureau of Reclamation saw to the construction of most of the features of the CVP, while the Army Corps of Engineers added Folsom and New Melones Dams.

The great era of large dams and water resource projects encompassing entire river systems in the United States got underway in the 1920s and was propelled mightily by the public works program push of the New Deal in the 1930s.  The CVP, Columbia Basin Project (Grand Coulee and Bonneville Dams) and the Tennessee Valley Authority (Norris Dam and several others) were all launched under the New Deal. The Colorado River Storage Project began under the Hoover Administration but Boulder (Hoover) Dam was completed under the New Deal.  The great dam building era continued through the 1970s but eventually petered out as all the best dam sites were utilized and environmental opposition grew after dams were proposed  for the Grand Canyon and other unsuitable places.

Project originally submitted by Richard A Walker on February 18, 2017.