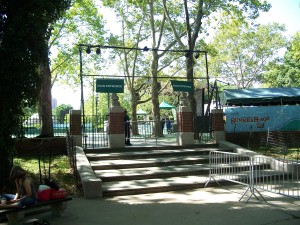 The history of Rumsey Playfield, the site of the City’s popular SummerStage festival and other performances, is closely tied to the WPA. In 1864, a building was constructed on this site first as the Ladies Refreshment Saloon and soon became an expensive restaurant known as the “Casino.” The building was torn down by the WPA after a long legal fight between the restaurant owners and Robert Moses. On May 7th, 1937, the Department of Parks announced the completion of the new Mary Harriman Rumsey Playground and explained the legal conflict that had preceded it:

“The Park Department announces that the Mary Harriman Rumsey Playground in Central Park, on the site of the old Casino, is completed and will be opened to the public Friday, May 7th, without formal ceremony…

After a legal conflict which started shortly after Commissioner Moses took of office in January, 1934, the city gained on May 2st [sic], 1936, an unanimous victory in the Appellate Division of the Supreme Court on the question of the Park Department’s right to remove, for purposes of other park development, buildings which had been erected solely as incidental to park use. Immediately, W. P. A. workmen started to tear down the old Casino, formerly an exclusive high-priced restaurant and night-club set aside for a few people of wealth, and of no use to the general public.

This one and one-quarter acre area occupied by the Casino building and its parking space, now offers facilities for a juvenile age group not provided for in the marginal play-grounds for small children located around the perimeter of Central Park and marks another step in setting aside active play space within the park to insure to older people the enjoyment of nearby spaces for quiet and relaxation. Besides swings, slides end other play equipment, a large oval-shaped wading pool has been constructed. Encircling it is a roller-skating track, around whose outer edge are permanent benches under shade trees for guardians of children and for children to adjust their skates. Comfort facilities for boys and girls, separated by a latticed open shelter, are incorporated in a brick building of Georgian architecture. The entire area, including paths and landscaping, was designed to connect and fit the playground to existing surrounding park features.”

In 1938, a WPA statue of Mother Goose was erected at the entrance to the playground.

In 1986, the playground, which had fallen into disrepair, was redeveloped as the Rumsey Playfield, with “a clay-surfaced sports area for school groups” (NYC Parks). Which, if any, of the other playground facilities are still extant is unknown to the Living New Deal.