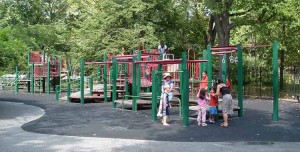 A June 1936 press release from the Department of Parks announced the opening of four new playgrounds along Central Park West at 81st, 84th, 96th and 100th Streets. This playground at 96th St. is now known as the Rudin Family Playground. Today’s Central Park Conservancy website confirms that this is the park that was built “between 1935 and 1936 as part of the perimeter playground system.”

The playground was rebuilt in 1992. Today, a “prominent wisteria-covered trellis, which divides the space into two areas, provides a shaded place to rest and watch children play, and is well-used by parents and caregivers”   (planforplay.org).