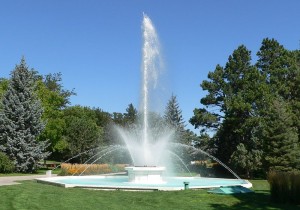 NHRP Nomination Form:
“The City of Alliance Central Park Fountain was constructed on the corner of 10th Street and Niobrara Avenue in Alliance, Nebraska in 1935. The Fountain, an octagonal concrete structure which features tiers of water patterns and electrically controlled colored lights, was assembled with the combined efforts of the Works Progress Administration (WPA) and crews from the City of Alliance. The Fountain occupies a prominent location in Alliance’s Central Park along an original county and now city, thoroughfare.

From the time of its first use in 1935 to the present, the Fountain has been a source of beauty and community pride for the residents of Alliance and the surrounding area.”

Project originally submitted by Evan Kalish on May 3, 2015.