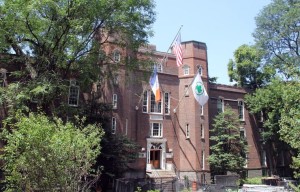 The Central Park Arsenal was built 1847-51, but served only briefly in that function.  After 1853, it was a police precinct house, the American Museum of Natural History, a menagerie, an art gallery, the Municipal Weather Bureau, a restaurant, and, finally in 1914, the Manhattan Parks Department. In 1934, the five borough Parks Departments were consolidated into a unified New York City Parks Department. Then, the Arsenal was overhauled by Depression-era relief labor paid for by New Deal programs.
The architect for the project was Aymar Embury II, who was the chief designer for New Deal/Parks Department projects around the city (the Wikipedia entry on Embury says that, “it is possible that Embury supervised the design of over six hundred public projects”). When Embury took on the Arsenal, it was covered with ugly gray stucco; he had it blasted off to reveal the underlying bricks and then designed the Central Park Zoo to harmonize with it.  The lobby walls were covered from floor to ceiling with murals by the WPA’s Director of Murals for the NYC Parks Department, Allen Saalburg. The WPA also made a new main entrance with miltary-motif decorations.Sources:

The Report of the Department of Parks to August 1934: Memorandum on 1935 Budget Request of the Department of Parks, NYC Department of Parks archive: “When the Arsenal became part of the new Zoo group, the walls were sandblasted, and the original brick repointed. The conical roofs topping the eight towere were removed; the towers raised and concrete ramparts placed as copings. The restoration of the building to substantially its original character has brought out the naive excellence of its amhitecture, and as restored it is one of ths handsomest public buildings in the City.”

Thomas Jefferson Play Center, Landmarks Preservation Commission, July 24, 2007 Designation List 394 LP-2236: ”When Moses took over the Parks Department, it was already employing 69,000 relief workers funded mainly by the federal Civil Works Administration (CWA) and the Temporary Emergency Relief Administration (TERA).” This is the best explanation we have found so far of how the Arsenal was renovated for the new unifed Parks Department

The 1851 Central Park Arsenal at the Daytonian in Manhattan website (historic images).

This text adapted from www.kermitproject.org 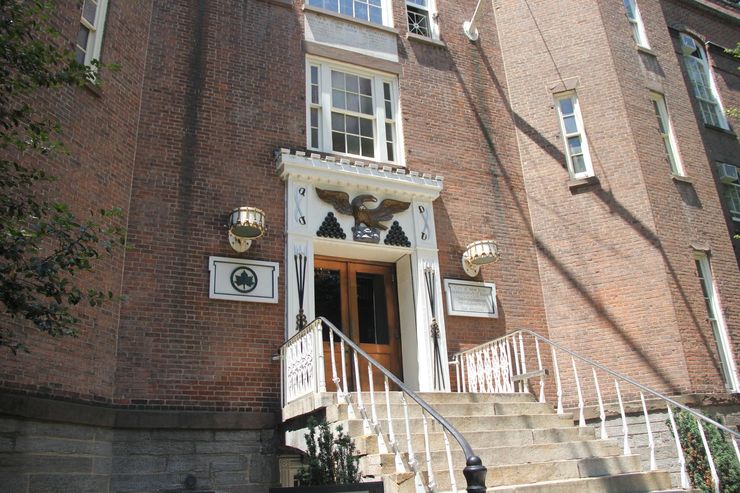